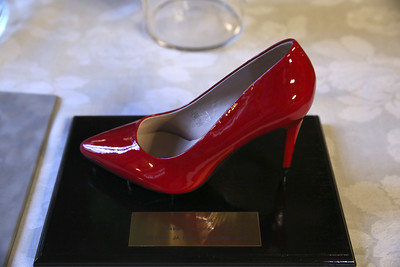 Secretary General of the National Council of Women of Finland, Terhi Heinilä, has been recognised for her significant contribution to promoting gender equality in sport. The annual award from Finland’s Ministry of Education and Culture, known as the “Spikes Prize”, was awarded to Heinilä in November.

The annual award’s name in Finnish – ”Piikkarit” – stands for both high heel shoes and track spikes, and was awarded for a recent project led by the National Council of Women of Finland and the Council for Gender Equality. The project challenged the Football Association of Finland (FAF) and Finland’s national public service broadcasting company Yleisradio Oy (YLE), to actively promote gender equality.

As a result, the FAF also made equal contracts for women’s and men’s national teams in autumn 2019. YLE increased the percentage of women in sport news, including ensuring the broadcasting of national team sports was gender equal. YLE also broadcasted the women’s Football and Ice Hockey World Championships in 2019 at the same level with men’s games including studios, experts, interviews and more.

“To be able to achieve gender equity in sports, those at the highest level have to commit to gender equality and change its leading processes and structures. Sport organisations need to have the courage to continuously produce actions to improve equality and increase diversity in sports,” Heinilä said.

Heinilä has been an active role model for gender equity in sports for decades, especially internationally. She served as Secretary General for the International Working Group for Women & Sport (IWG) in 2010 to 2014, and was previously Director of International Relations for the Finnish Sports Federation up until 2012.

As current Secretary General of the National Council of Women of Finland, she leads a team operating as a co-operative forum for Finnish women’s organisations that promote gender equality. Currently, the Council consists of 60 member organisations which include 400,000 members, mostly women. Together, they focus on advancing and promoting women’s rights and gender equality, as well as women’s and girls’ human rights.

About the Spikes Prize

The Spikes Prize is awarded each year for merits in promoting gender equality and plurality in sport.

It is awarded to an association, group, project or person operating in Finland on a permanent basis.

English (New Zealand)
We use cookies to ensure that we give you the best experience on our website. We use essential cookies to enable certain features. Third parties set cookies for both essential and non-essential purposes including analytics (e.g., Google Analytics) and advertising. If you continue to use this site we will assume that you are happy with it.Ok